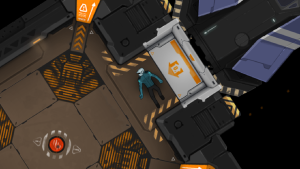 The player just got shot immediately after entering via the airlock. Whoops.

An airlock is the entry point for any ship. In order to access the ship, the player has to reach the airlock inside their pod. When a player's character is knocked out or unconscious, and discovered by guards, they will be taken to and ejected from nearest airlock or other breach in the ship if it is closer (such as a broken window or a destroyed chunk of the ship from a Foundry Brick). Some larger ships have a second airlock, which requires the character to obtain a keycard in order to unlock it for use.