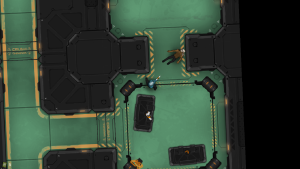 A dead guard in brown uniform.

A guard is a crew member whose sole purpose in life is to protect it against ne'er-do-wells like the player. They are armed with a variety of weapons and will either patrol the ship or man one of its subsystems, like turrets or the cockpit.

Guards will either remain stationary or randomly move around the ship to carry out tasks. Their normal patrol routes can occasionally take them through doors.

They will investigate any suspicious sounds or sights, such as

When they are sufficiently worried, they will raise the alarm.

Guards' bodies can be carried, to avoid other guards finding them.

Each guard can have a special kit, which determines their abilities.