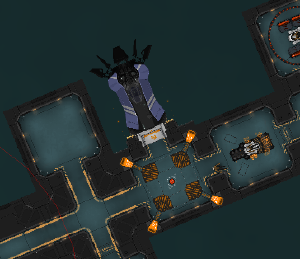 The pod, docked with an airlock onboard the target ship.

The pod is a small space vehicle used by the player to reach target ships.

The pod is controlled with mouse clicks, setting its destination. The objective is to connect the pod to the airlock, allowing the player to infiltrate the ship and complete their objectives. Furthermore, should the player suffer something unpleasant, like evacuation into space, the pod can be used to recover the spaced body and continue the game.

There are different pod types available, from each of the four main factions, with their own unique abilities. For example, the Foundry Brick can ram into any section of the enemy ship, creating an improvised entry point - the caveat being that it expends some of its hit points to achieve that.

The player can at any time switch control from the player character to the pod via the Space menu, allowing them to relocate it to a new airlock or to pick up their spaced body (in case they get shot by the crew of the target ship).

In general, the pod requires a bit of finesse when it comes to flying it. Since there's no friction in vacuum, if you keep accelerating, you'll keep gaining speed, eventually overshooting your target (bad on time-limited missions). It's best to accelerate for a bit, use time compression (F), then when your target is in range, brake and match speed.

To dock with the target ship, you need either an airlock (marked with a big green arrow), a destroyed corridor (if the ship was traveling through a combat zone and got damaged or if you shot it up), or the Forge Brick, which makes its own airlock. When docking, stay away from cones of light projecting out the sides: These are optical Sensors and they control turrets which hurt. If shot, the pod will spin out of control and you'll have to repair it by following onscreen instructions (holding down the specified keys and avoiding others like the plague, or your character simply dies).

In order to unlock new pod types, you need to liberate stations. Consult the strategy map to know just where you need to go.